Today, 6 December, a bail hearing had been scheduled for Luka Binniyat, the Christian journalist and human rights activist detained last month after reporting on Fulani militia attacks against Christian communities in Kaduna state. Binniyat’s lawyers came to plead his case at the Magistrate Court in Barnawa, and many of his supporters were present as well, including Barrister Sam Atunk, Jonathan Asake, the National President of the Southern Kaduna People’s Union, and Binniyat’s wife.

But the judge was nowhere to be found.

Court employees informed Binniyat’s lawyers that the judge had gone on leave on 1 December, even though he had scheduled this high-profile case for 6 December. Binniyat’s new court date is 29 December, but some court workers openly doubted whether that hearing would be held either, since many court employees will be on holiday then.

Meanwhile, on 2 December, identical charges were filed against Binniyat in Nigerian Federal Court. (See photos below). The new charges are significant because one key argument advanced by Binniyat’s lawyers had been that the original charges were filed in the wrong jurisdiction. Many of Binniyat’s supporters believe that the judge skipped Binniyat’s bail hearing today to keep Binniyat in jail while his case is moved to the correct jurisdiction.

Binniyat was arrested on 4 November, after a U.S.-based newspaper, the Epoch Times, published his reporting about Fulani militia attacks against Christian communities in his native Kaduna state. He was charged under Nigeria’s 2015 Cybercrime Prevention and Prohibition Act, which makes “cyberstalking” – defined to include online speech that is “grossly offensive” or “causes annoyance” – a crime. Rights groups have criticized the 2015 law as an obvious violation of the right to free speech and press guaranteed in Nigeria’s constitution. Binniyat was previously imprisoned on cyberstalking charges in 2017.

Christian Solidarity International has joined the Committee to Protect Journalists in calling for Binniyat's immediate release, and the dropping of all charges against him. 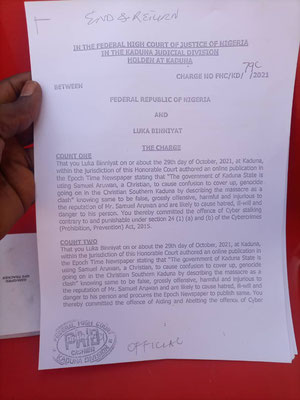 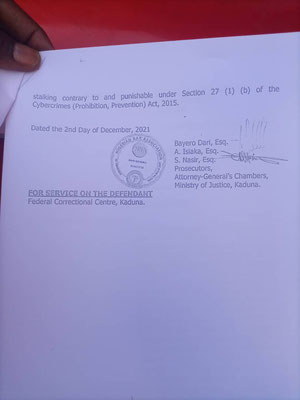