How I slipped out of Nigeria amidst threats to my life

Steven Kefas, a journalist and human rights activist from Kaduna State, has been persecuted and imprisoned over his fearless reporting on the Fulani militia attacks in his home state.

He previously wrote for Nigeria Report about the Kaduna State government's war on journalists and whistleblowers. 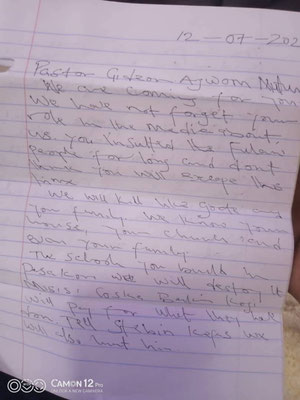 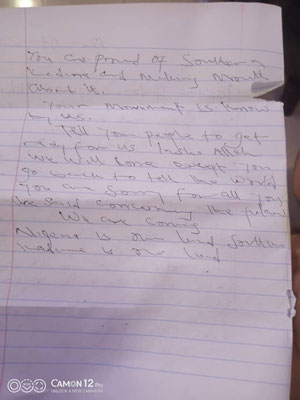 Some of the threatening messages Steven Kefas received in the weeks before his decision to leave Nigeria.

When I stepped foot outside the Kaduna maximum security prison on 29 October 2019, I thought I was really free. But I was wrong; what was to come would be more terrible than the prison walls and the jailer's chains. I had been in prison for 162 days under very dehumanising conditions for my advocacy against the senseless killings of Christians in my native Southern Kaduna, and northern Nigeria as a whole.

In April 2020, barely six months after my release from jail by the government, I went on the run again because so-called security agents were coming after me for simply tweeting a news link published by Zenger news, a United States-based digital newspaper. Zenger news had reported that a mobile phone recovered from the scene of a terrorist attack on the Christian community of Chawai in Kauru local government area of Kaduna State contained phone numbers of some  serving military personnel.

The report further alleged links between the terrorists and the Nigerian military. I didn't write the report, I only tweeted the story. Shortly after my tweet went viral with over 4,000 retweets, I started getting strange phone calls from people threatening me. I had to leave my home and travel to another town for my safety.

Attacked in my sleep

After some months the threats subsided, or so I thought. I continued my advocacy until I had another shock in July 2021 - a letter purportedly written by Fulani terrorists and addressed to a friend of mine, Pastor Gideon Mutum, a Kafanchan-based clergyman and human rights activist. The terrorists had told Pastor Mutum to inform me that they would hunt me down. Pastor Mutum had to flee Kafanchan and I also relocated to another town.

In April 2022, I was attacked in my sleep by unknown persons who sprayed poisonous chemicals - believed by doctors to be chlorine gas - into my bedroom through the open window. I spent weeks in hospital due to the effect of the gas I inhaled. I am still suffering respiratory problems as a result.

After the gas incident, I relocated from my house to a different town in June. Shortly after my relocation, former neighbours began to inform me about unknown individuals who had come to ask after me. A few days before I left Nigeria, my former pastor sent me a WhatsApp message informing me that some people who claimed to be Department of State Security officials had come to look for me.

How I left Nigeria

When my good friend the Very Rev. Fr. John Mark Cheitnum was abducted and gruesomely murdered by terrorists, I knew that it was just a matter of time before I would also be abducted or killed. Fr. Cheitnum, a vocal advocate for human rights, justice and equity was abducted on 15 July 2022 and murdered almost immediately. His decomposing body was recovered a few days later.

A day before he was buried, I was warned by a friend who works with one of the intelligence agencies not to attend the burial. He warned me that plans to abduct me were at an advanced stage, and that I should leave northern Nigeria, and possibly the country, if I could.

Less than two weeks later, on 27 July, I embarked on a tumultuous journey through one of Nigeria's northern borders by road. I left the country with nothing other than the clothes I was wearing, my passport and, most importantly, faith. It was a journey I never planned for but that was necessary if I was to stay alive. I had no idea where I was going.

Today, I am in exile, a refugee in another man's country, simply because I chose to speak for the voiceless men, women and children that are daily being massacred because of their faith or ethnicity in Nigeria.